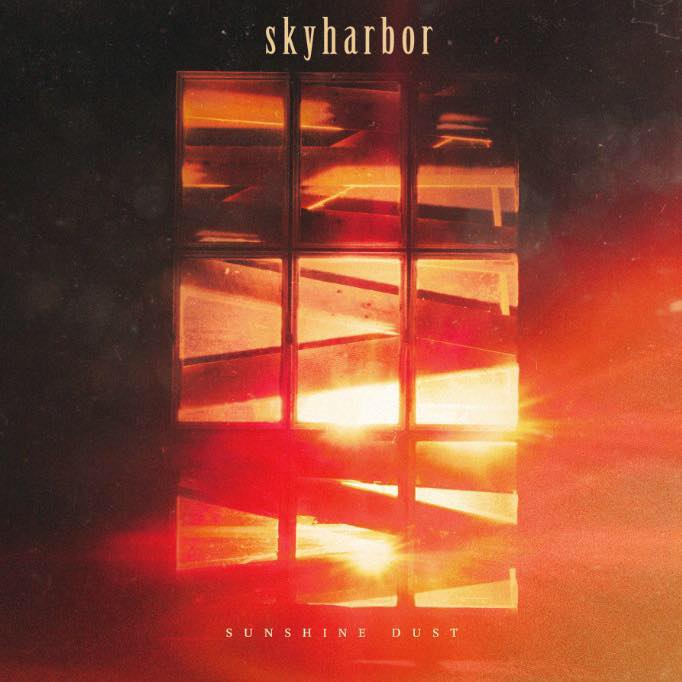 It feels like I’ve been waiting an incredibly long time for this album to drop. There is so much to be said about Sunshine Dust. It’s been a long time coming. After losing Dan Tompkins to TESSERACT again (which I was personally thrilled about as I always thought Tompkins thrived more in TESSERACT), SKYHARBOR had to find a new vocalist and solidify their line-up. They’ve struck gold with new frontman Eric Emery, who thankfully isn’t a Dan Tompkins copycat, but is a stellar singer in his own right.

But this is all old news! It’s been 3 years since the band released Out of Time and 2 years since they released Chemical Hands. Both incredible tracks and arguably the best material SKYHARBOR have ever done. Or so I thought anyway. When the band were picked up by record label eOne, they re-recorded all of the tracks they had written which involved a re-working of the previously released songs. Chemical Hands is now Synthetic Hands, but more about that track later.

Opening track Signal is a hauntingly calm intro and an opportunity for Emery to tease his prog-perfect vocals. We are soon brought to our senses with Dim, which is anything but. What I found frustrating about older SKYHARBOR is the songs never seemed focused enough. This isn’t the case with Sunshine Dust and with this track it is the perfect tune to reintroduce themselves to old fans and new. With a modest verse, but a storming chorus, Dim is going to grab your attention and the band will sure enough keep you interested until the end of this magnificent album.

When next track Out of Time was originally released I thought it was spectacular. Luckily most of the original magic remains with this re-recording. With its spacey beginning, rumbling bass and glorious riffs this song is a winner. The only noticeable change which is immediate is the vocals are higher in the mix in the chorus and sound a bit sharper, this is obviously only ever going to be an improvement! I adore the futuristic elements in this song and we all know that this chorus is going to get every fan belting it out at shows. I’m incredibly glad they’ve kept this song for the album.

The biggest shock of this album is the total re-working of Chemical Hands into Synthetic Hands. With an entirely new beginning, new title and new lyrics I was initially disappointed it wasn’t like the original, but after a few listens you’ll soon appreciate it in its new form. The melodies are mostly the same and the guitar wizardry of Keshav Dhar and Devesh Dayal is really emphasised here. I’m especially pleased they kept the last two minutes roughly the same, because the climax of the song is one of the highlights of the album. This is how melodic progressive metal should be done.

After such a strong track I am bewildered SKYHARBOR have another belter immediately after in the form of Blindside. One of my personal favourites of Sunshine Dust, its ambient beginning is utterly mesmerising, but the huge chorus storms in with oodles of feeling. I really enjoy the delicate riffs of this song, with some of the elements reminding me of shoegaze and postrock. This softer approach also introduces Disengage_Evacuate. With Emery’s hushed vocals you’re led to believe this will be a low-key song, but it’s got another crackin’ chorus. This is one of their more eclectic tracks, but it is one I don’t find myself returning to.

Ethos is another strong track. It’s got a NORTHLANE vibe and an excellent message. There is something triumphant about this song, it is probably the lyrics but the accompaniment somehow sounds optimistic too. This is a bit of a contrast with Ugly Heart, which is a bit of a heart-wrenching track but a beautiful song. The subtle riffs and atmospherics in Ugly Heart really help to make this track shine, along with Emery’s powerful vocal performance.

The Reckoning provides an electronic-fuelled interlude which I find to be a much needed ‘palette cleanser’ before the last chunk of the album. You’ll see what I mean when you’re confronted with Dissent, a DEFTONES/FINCH-esque stomper of a track. There is a brilliant nostalgic/grungy air to this track – progressive grunge? You’ll need to save energy for the rollercoaster that is Menance. It’s got a strong, melodic beginning and a charming chorus but the last half is a ferocious beast which catches you off guard. It merges flawlessly into Temptress which is another interlude, albeit a rather tense one.

This album has been a fantastic voyage through prog, ambient, rock, post-rock and metal, but nothing prepares you for the near-perfect finale – the title track. If one song on Sunshine Dust was going to give you goosebumps, it was going to be this one. It’s a beautifully laidback and melodic song, but the ending is a masterpiece. Dan Tompkins never quite reached climatic heights like this with this amount of power, and this is where Emery really proves himself. This impressive album needed something special to close it and SKYHARBOR pulled it out of the bag. The band will no doubt propel themselves back to the forefront of progressive metal with this effort. It will be very well deserved. Welcome back.